A Scene is a way to have different assets and logic for a specific part of the game. Games can have many scenes (for example main menu, tutorial, different levels) that display different information, and usually, there is some way for a Player to get from one scene to the other.

All projects come with one scene by default called Main. This Main scene is active by default.

Creators can create new scenes from the Scenes window. Clicking on the Scenes button at the top of the Hierarchy will open a window that will show a list of all scenes for the project, and a Create New Scene button at the bottom of that list. 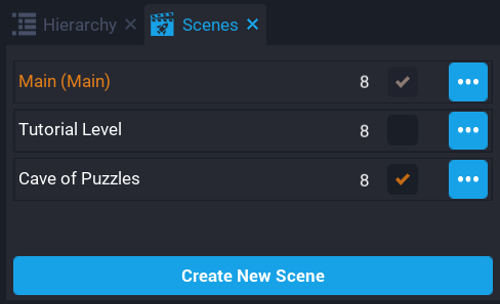 A newly created scene will give creators the option to choose to load that scene.

When loading a Scene, Core will unload all assets in the project Hierarchy (that is template instances, script instances, UI), and load all the assets for the scene that will be loaded. When loading a scene, make sure to save the current scene or progress will be lost. Core will notify the creator of any unsaved changes when attempting to switch scenes.

A Scene can be loaded by clicking on the scene name in the Scene window.

There are 2 other ways to load a scene: 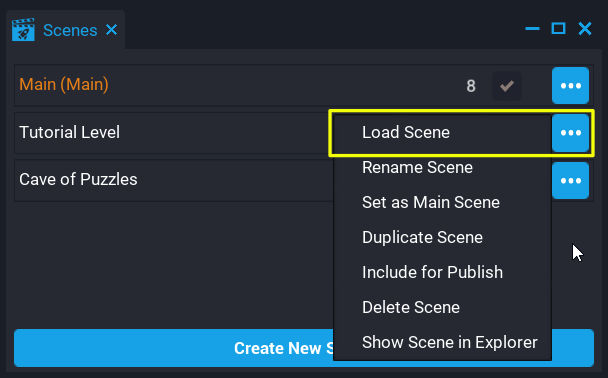 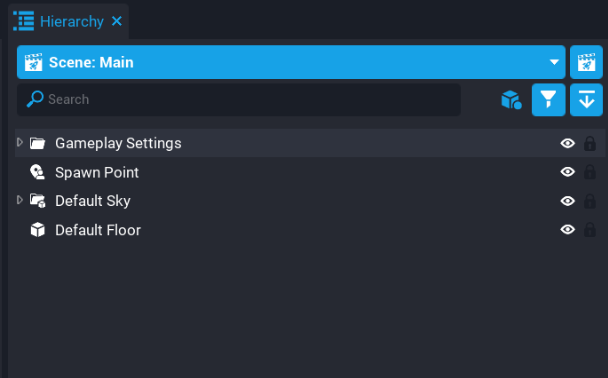 Each scene can have a different maximum amount of players allowed. For example, a social space scene could have 32 players, whereas another scene in your game could have 4 players. 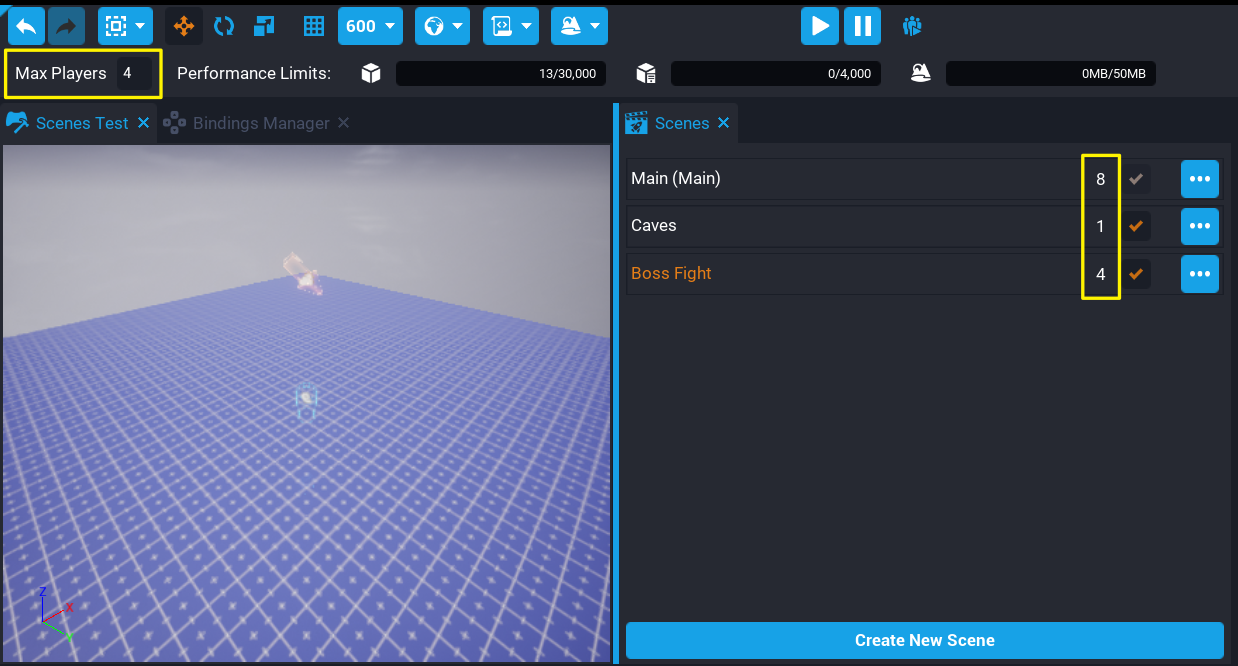 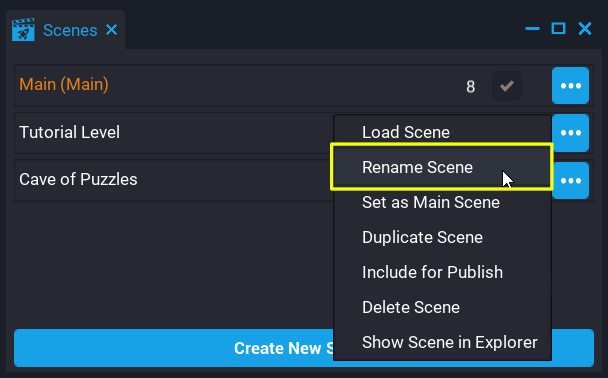 The main scene for a project is the scene that will be loaded for players by default when entering your game. Any scene created can be set up as the main scene for the project. For example, if there are 2 scenes that have a different theme (that is Christmas vs Summer), it is easy to change which scene is the main one and republish your project. When players load your game, they will load the main scene first.

Scenes set to Main Scene will also be the first scene loaded when loading your project. 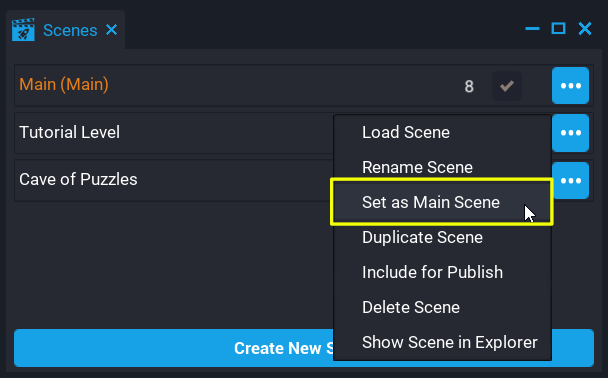 Duplicating a scene is a good way to use an existing scene as a base. All assets in the scene being duplicated will be copied over to the new scene. For example, creating a tutorial based on the first level of your game without needing to start a new scene from scratch. 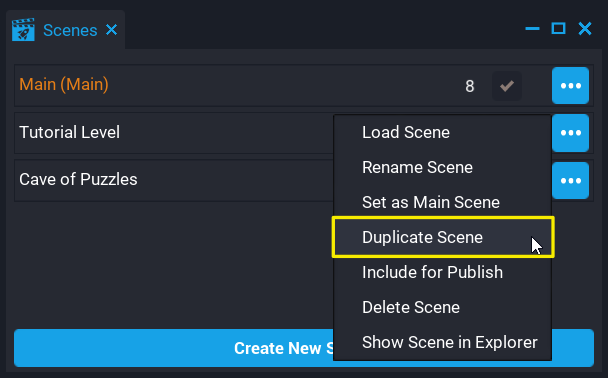 Scenes can be included or excluded when publishing a game. This can be done from the Scenes window by clicking on the checkbox, or by selecting from the options menu.

If a scene is already set to Include for Publish, the option will change to Exclude from Publish. 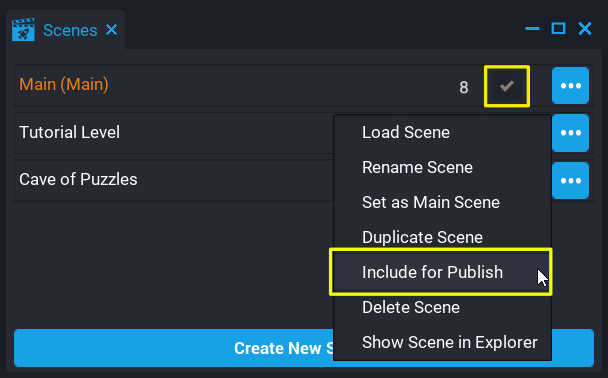 To delete a scene from your project, it can not be currently loaded or set as the main scene. When deleting a scene, all objects in the Hierarchy will be deleted. Objects such as template instances (including script instances) will be deleted from the Hierarchy, but not from Project Content. This means, any changes to a template that needs to be kept, should be updated before the scene is deleted.

Core will confirm if the scene should be deleted. 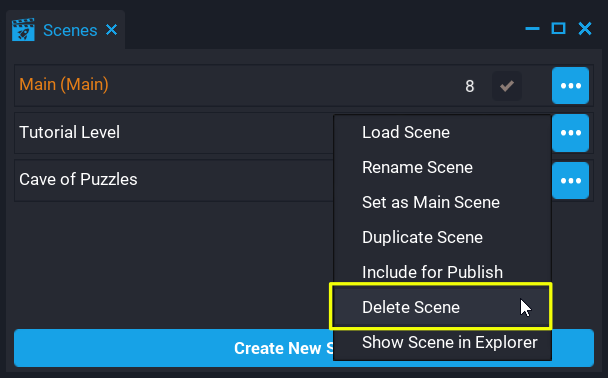 Each scene created is a physical folder on your system. Only scenes that have been saved can be revealed in the explorer. 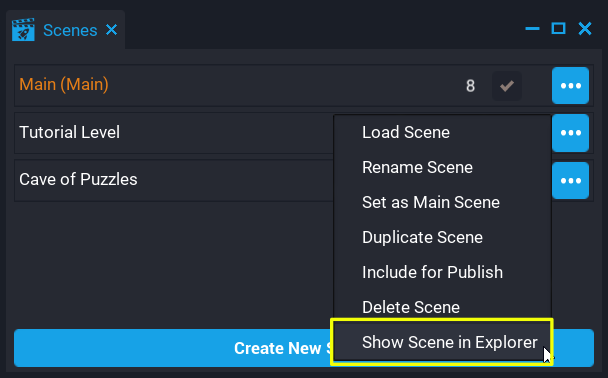 Publishing a game will allow creators to select which scenes to publish. If no scenes have been created, then the main scene will be selected by default. If there are new scenes added to your project, those scenes will need to be ticked in the Scenes window, or from the publishing window.

Click on the Publish Game button to bring up the Game Publishing Settings.

The Game Publishing Settings window has a Scenes dropdown where creators can select which scenes should be included when publishing.

When publishing any scenes that isn't the main scene, Core will only publish the assets used for that scene. 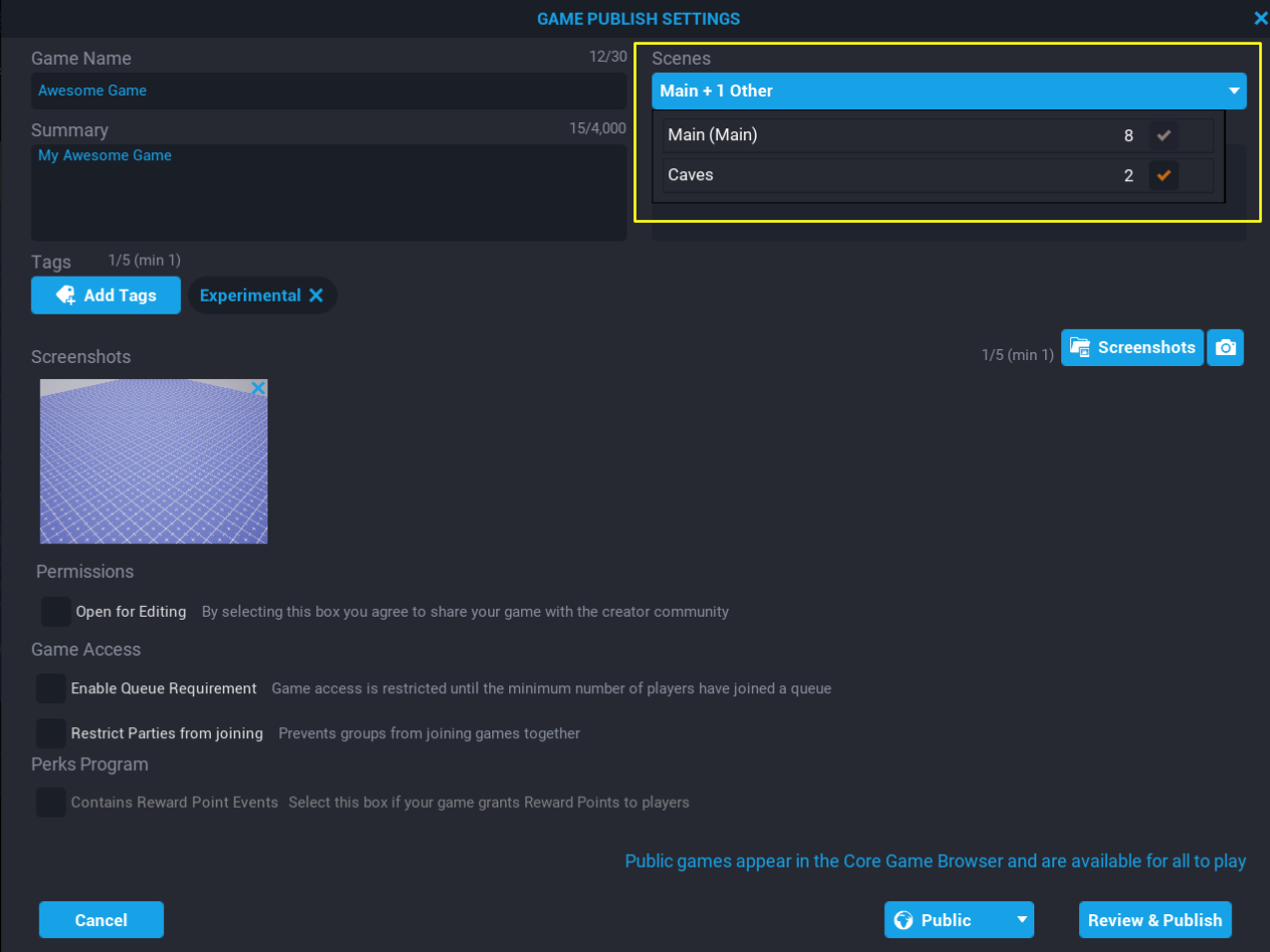 Transferring to a Scene

Transferring players between scenes can be done by calling TransferToScene. When calling this function, the scene name must be passed and must be named exactly as the scene is named.

Below is an example. When a player overlaps the trigger, they will be transferred to the Tutorial Scene.

TransferToScene supports a second argument that allows creators to specify the spawn point based on a matching key. If no match is found, then players will spawn at the origin, (0, 0, 0).

Any data stored in Storage is transferred to the scene loaded. For example, if a player has inventory data, this means the scene can look at the Storage for the player to retrieve that data without needing to use a Shared Storage Key.

Any Leaderboard setup for your project will be available to all your scenes. For example, if there is a score that persists between scenes, then this can be submitted to a Leaderboard from any scene within your project.

If players are in a party, and the party leader has the option Play with Party enabled, then when using TransferToScene, all party members will be transferred if the number of players in the party does not exceed the maximum players allowed for the scene.

Migrating from Child Games to Scenes

Creators that have been using our Child Games system previously, here's how to convert to the new Scenes system.