While both weapons and abilities can be utilized without having to code, if you do use scripting, so much more is possible.

With the power of Lua scripting, abilities can cause different chains of events to happen, as well as trigger visual effects and sound effects to really make something awesome.

In the first tutorials for abilities and weapons, we went over the quickest possible way to get something cool happening at the press of a button. In this more advanced tutorial, we are going to utilize the Lua scripting language to make something much more powerful and fun.

If you're fresh and new to any kind of programming, it would be good to visit the Intro to Lua tutorial. This will go over some key words and practices you would want to know.

Before doing this tutorial, make sure you've already gone through the Ability tutorial and the Weapon tutorial to understand the basics of how these things work.

We're going to be making a more complex weapon that utilizes scripting, and has multiple abilities.

To really see the power that the ability system gives us to make cool gameplay mechanics, you should understand what is happening behind the scenes of an ability.

The 4 Phases of an Ability

In Core, an ability is treated as 4 separate steps that happen immediately one right after another. This allows for distinctly different things to be programmed by a creator in each phase, creating a more complex overall ability.

The 4 different phases of an ability are:

Once an ability is triggered to start, it cycles through Cast > Execute > Recovery > Cooldown. The amount of time that each phase lasts can be set in the code. These timings would be very different depending on the type of ability being created.

To tie functionality to the different phases of an ability, Core uses Events. Each phase has an event that is activated at the very beginning of that phase.

A created function can be connected to these events, using :Connect(ability_name) within a script.

Connecting functions to events in an ability is the main task to be done when creating an ability, and is what makes each one different and infinitely customizable.

A magical spell might have a long cast time, whereas a punch would have a very short if not instant cast time.

Core allows building gameplay with as little or as much scripting as you would like. A powerful aspect of abilities is that they are kept in an Ability Object. This is a single Hierarchy object that holds all the most useful properties you might want to change to make your specific ability unique.

Using an Ability object in combination with scripting makes it similar to a data structure; an ability object is a nice single location to test different variables.

In this tutorial, we will be making a magic fire staff that the player can pick up, granting them two different abilities: a left-click fire burst and a right-click charged fire bomb.

Setting up the Basics

To begin, let's set up the look of the fire staff and create our weapon object. Open the project you wish to use, or an empty project.

Since we're making a magic staff and not a typical gun, we get to change the animations to something more fitting.

Use the VFX section of the simple weapon tutorial to create cool VFX for your weapon, and lean into fire themes to match the look of this fire staff--the most impactful sections of the weapon to change are:

Type the below code to create variables for the equipment and the ability:

The other variable we want to create is a reference to whether or not the player has died. We can use this to turn off the flying state if the player dies.

Next is the function that does that turning-off of the flying state by activating walking again:

The next two functions we need to include are what happens when the weapon is equipped or unequipped, which are primarily used for connecting the ability to turn off flying.

After the equip functions, there are two more functions we'll create that directly turn on and off flying. Add these to the current bottom of your script:

At the very bottom of the script, we code the main aspect that makes abilities so useful--we connect our functions to the events built within an ability.

Being able to connect functions to an ability's events is how we can control how long each phase takes in the ability object in the Hierarchy.

In this case, we're connecting our functions StartFlying() and StopFlying() to the execute event and the cooldown event.

The Default Binding set will need a new binding added to detect when the player presses a specific key.

Open up the Bindings Manager window from the Window menu, or by double clicking on the Default Binding set in My Binding Sets found in the Project Content window. 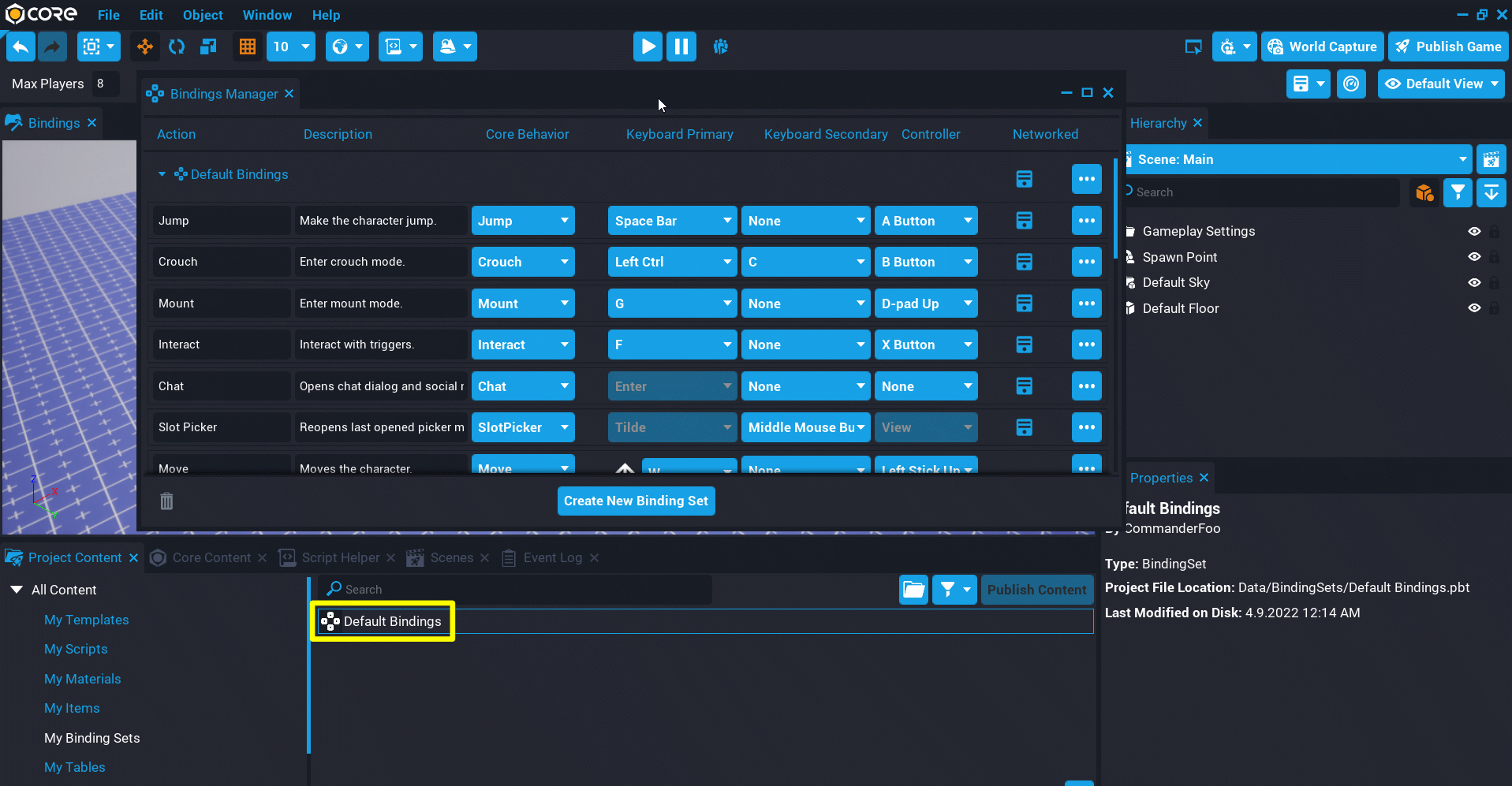 From the Bindings Window, click on the Add Bindings button to add a new row to the binding set. 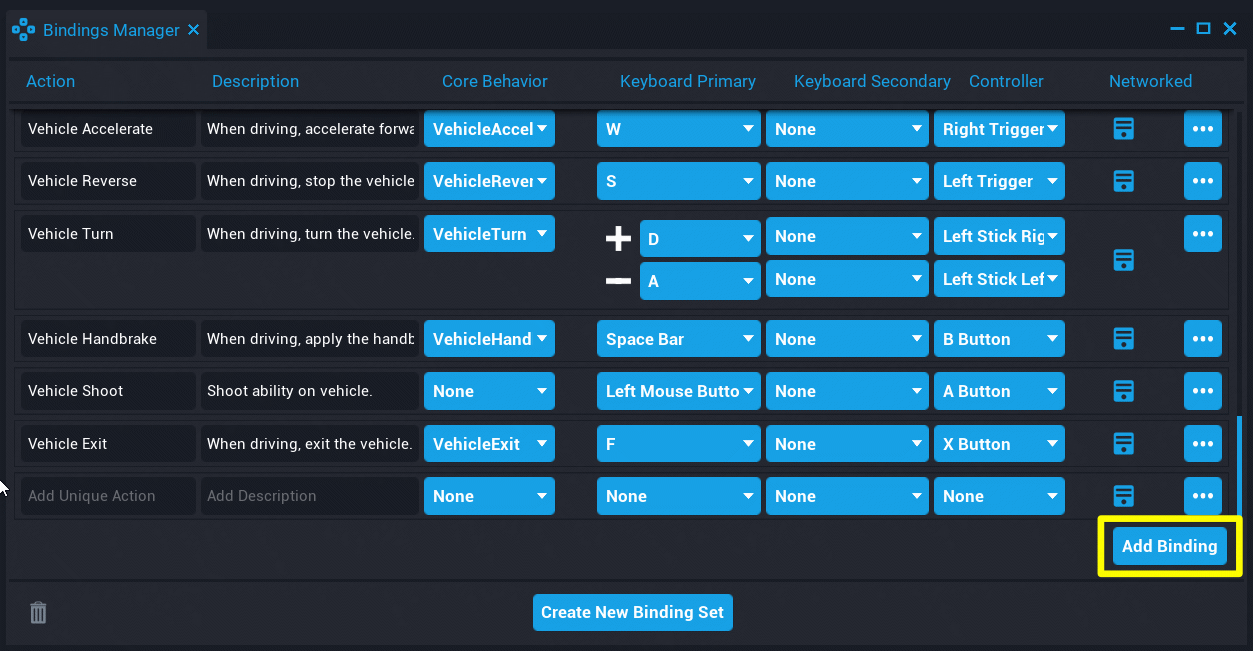 Now that we've written the script for flying to work and added the binding, we can adjust things from simply within the Properties window with the FireFly ability object selected.

This way we can alter the timing of how the ability works, like how long the user can fly, or how long until they're allowed to use the ability again.

Now this Fire Staff grants the ability to fly when pressing Shift on the keyboard to activate it.

Try it out and feel for the time lengths we entered--maybe you want a short or longer fly time, or a lower Cooldown so that it can be used more frequently. Adjust the values in the Execute and Cooldown sections to change these aspects.

We're going to add the ability to focus zoom with right click for better aiming.

So this was the first half of the camera aim setup--we have created a script for the client context, that only each individual player uses. The next part is the script that will live in a server context, as this is the part that needs to be replicated back to the server.

This server script will seem fairly similar to the client script, but this one is directly changing and affecting variables of the player.

Make sure that the Aim binding in the Bindings Manager is networked so the server script can read the input.

So let's get started on the server script.

A common aspect of games with player combat is the ability to land a headshot on someone--having both superior and lucky aim is fun to reward, and it can push players to want to improve their aim.

For our Fire Staff, let's set it up to do double damage if a player gets a successful headshot.

Ammo as a Pickup

One way to really change gameplay and force players to explore a map and be more resourceful is to give the weapon a limited ammo supply. Eventually, they'll have to go look for more.

With this fire staff, we could use something thematic and fiery like ember as an ammo pickup.

The main thing to change for our ammo supply is to change the properties of the weapon itself.

You'll probably want to set up User Interface (UI) for your fire staff's abilities. For a refresher on how to set this up, check out the Ability Tutorial's section on UI.