In this tutorial you will learn how to setup an area to create icons from 3D objects that can be used in the UI. For example, if you have an inventory and want the images to represent the in world object of the item, then you can use camera captures to do this. 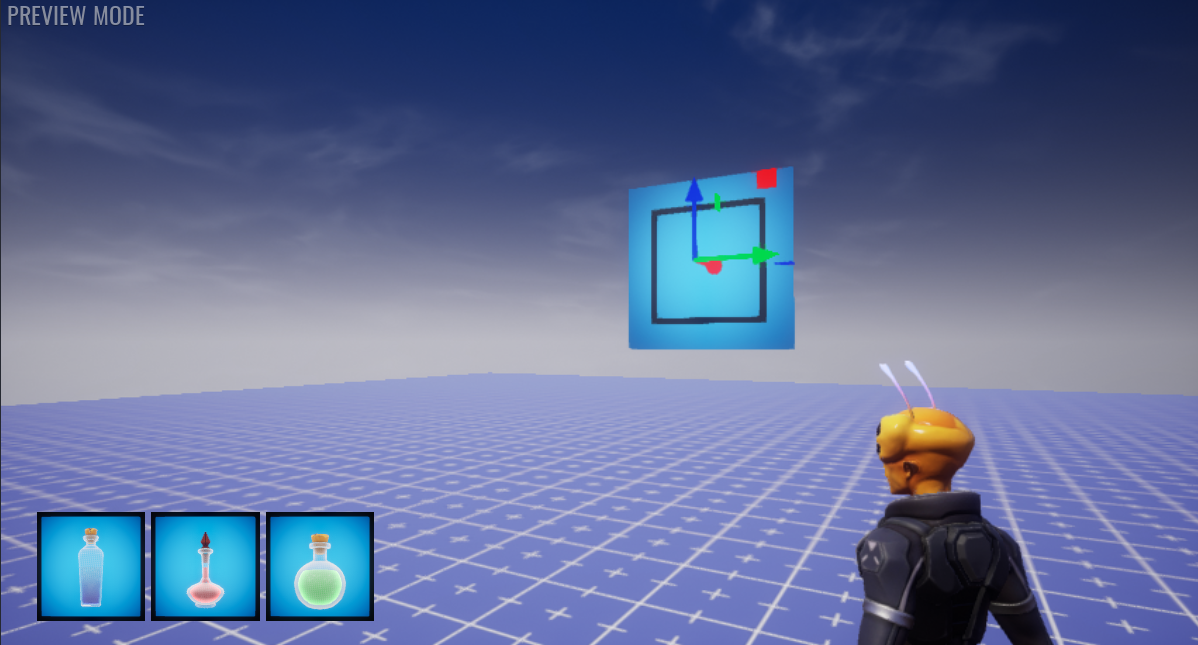 Camera capturing is done on the client, and all the components for the area you will be building can be done in a client context.

Create a Client Context and name it Icon Generator. 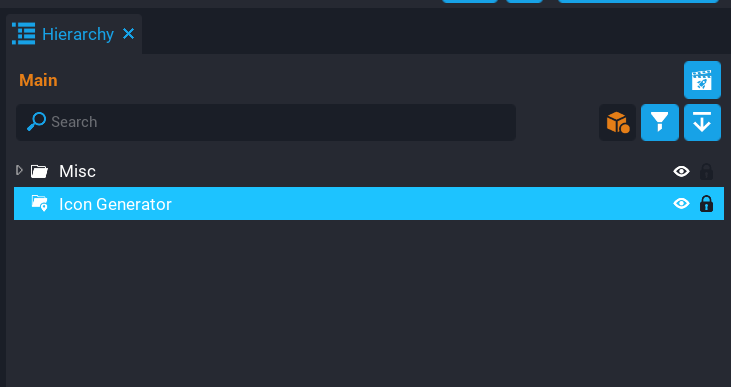 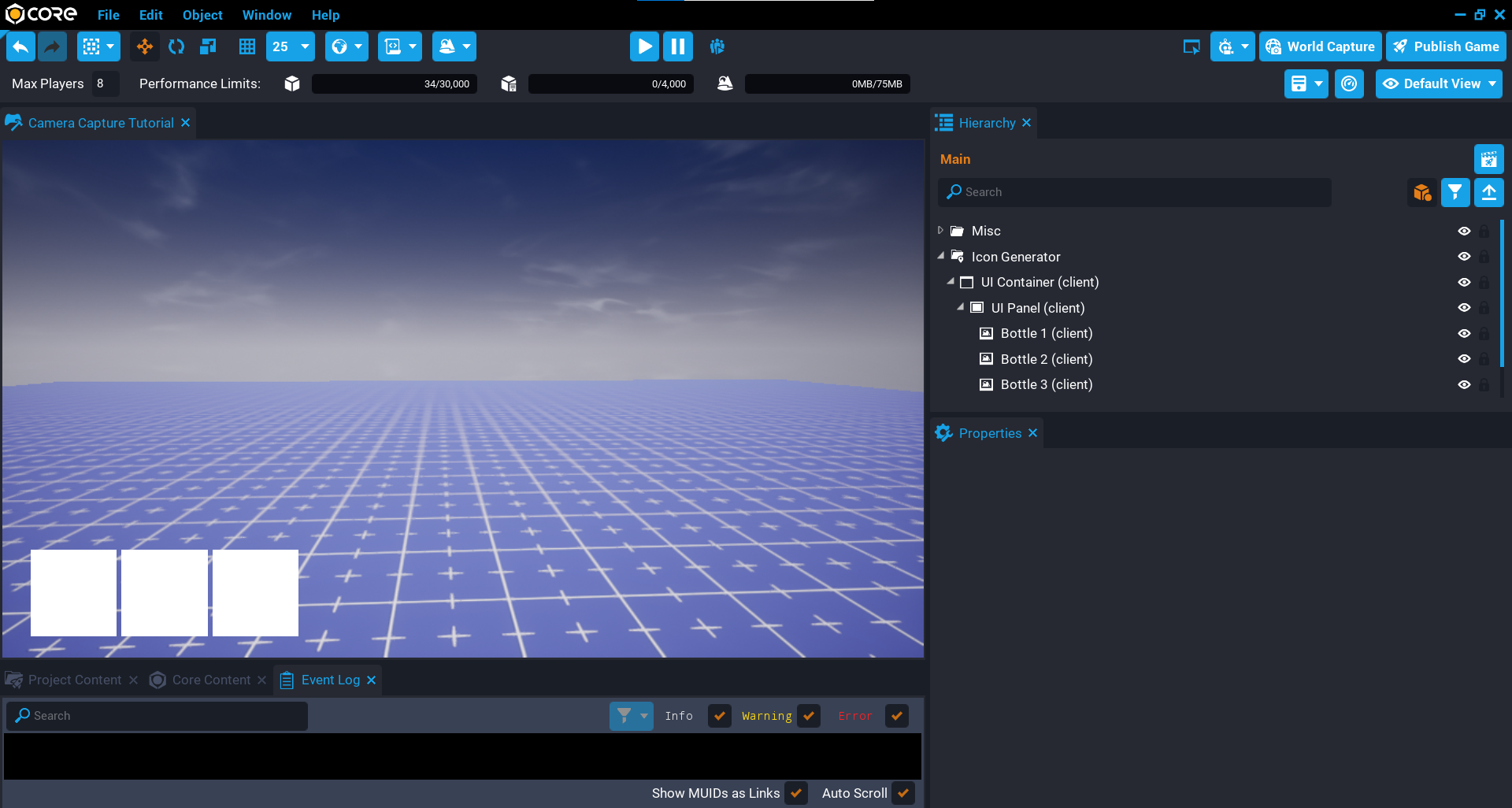 The area that will be used to capture images will contain a few different components to make it easy to customise the generated icon to suit your UI. 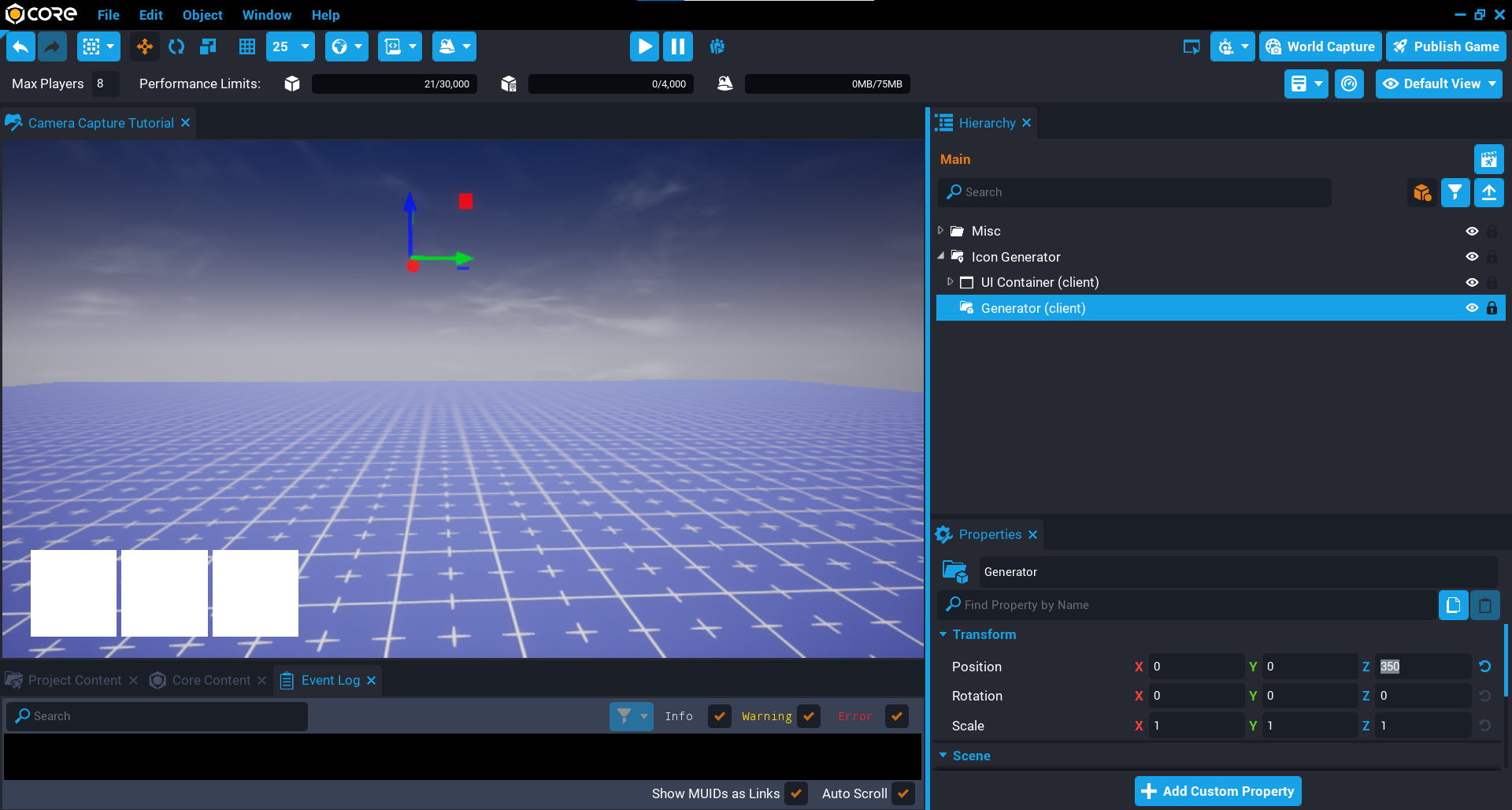 The components folder will contain all the components that build up the area for the generator. This keeps the Hierarchy tidy.

Create a new folder called Components inside the Generator folder.

The background will be displayed behind the icon in the UI. This is useful as it could be used to display icons with different rarity. 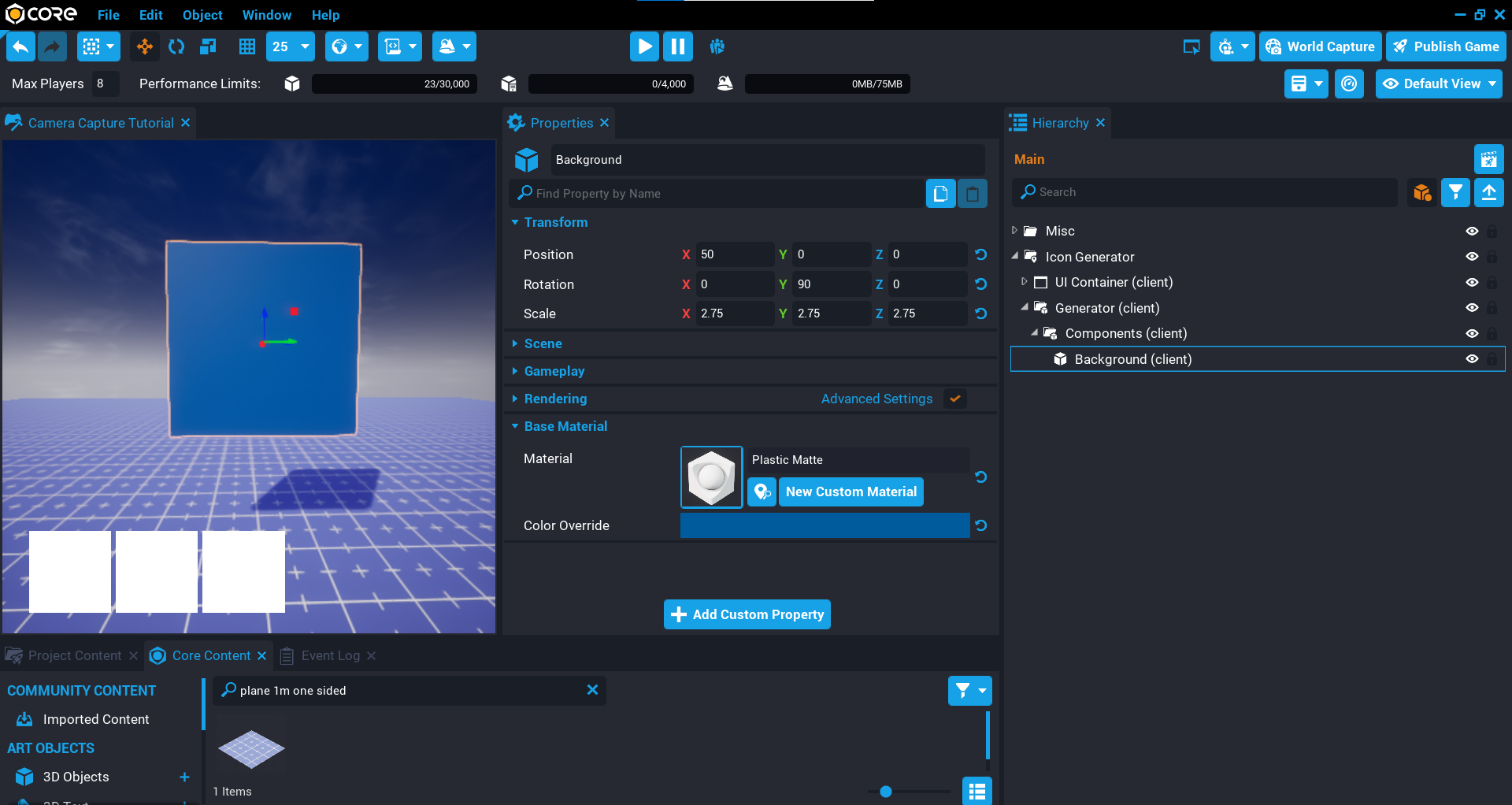 The frame will be used to add a frame around the UI image. This is optional, you could add the frame in the UI if you prefer. 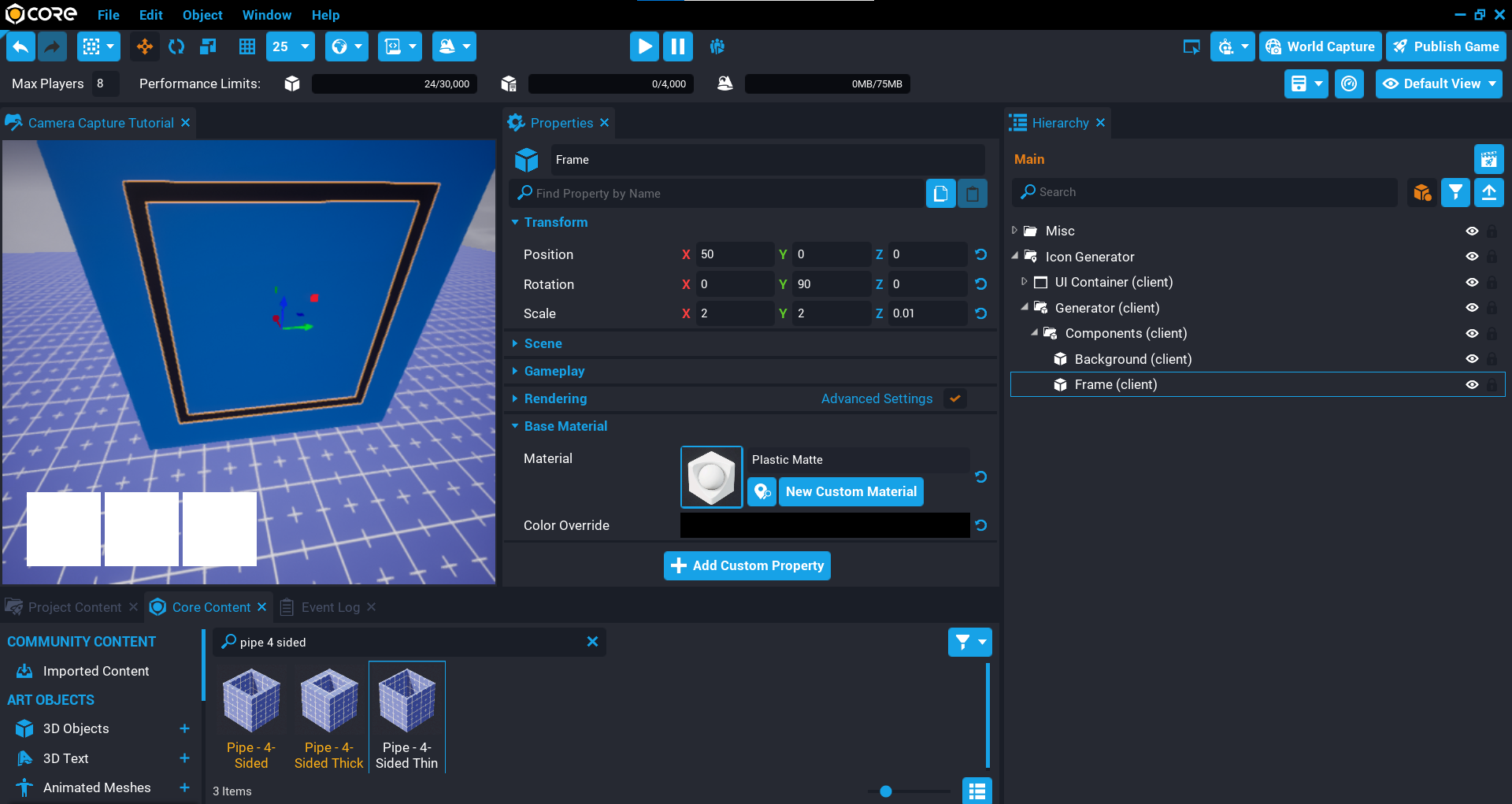 The point light will be used to light up the background, frame, and add some back lighting to the object that will be captured. You can adjust the light settings until you get the look you want. 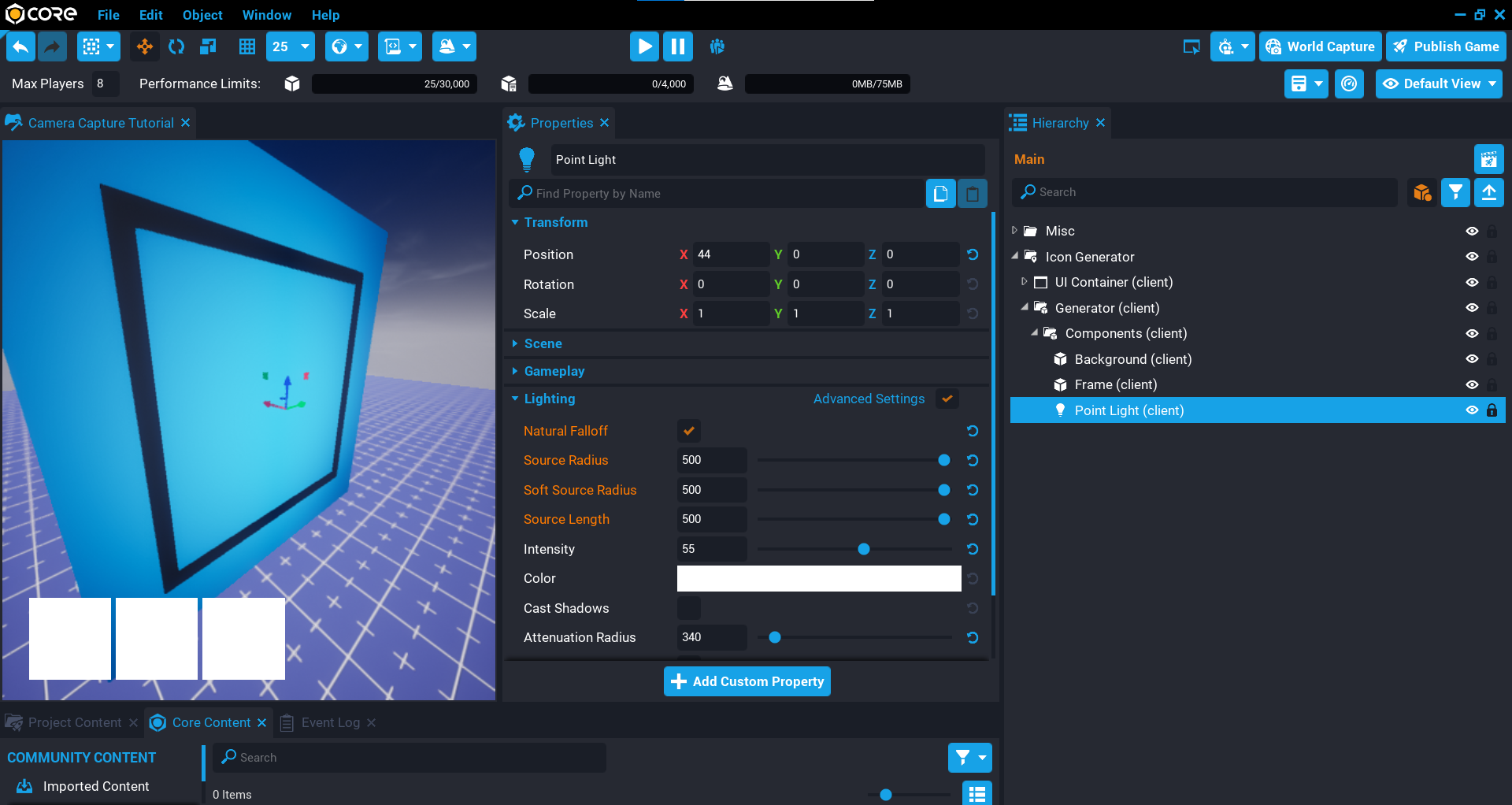 The dummy object will be used as a guide for where to position the object that will be captured so it is within the camera bounds. 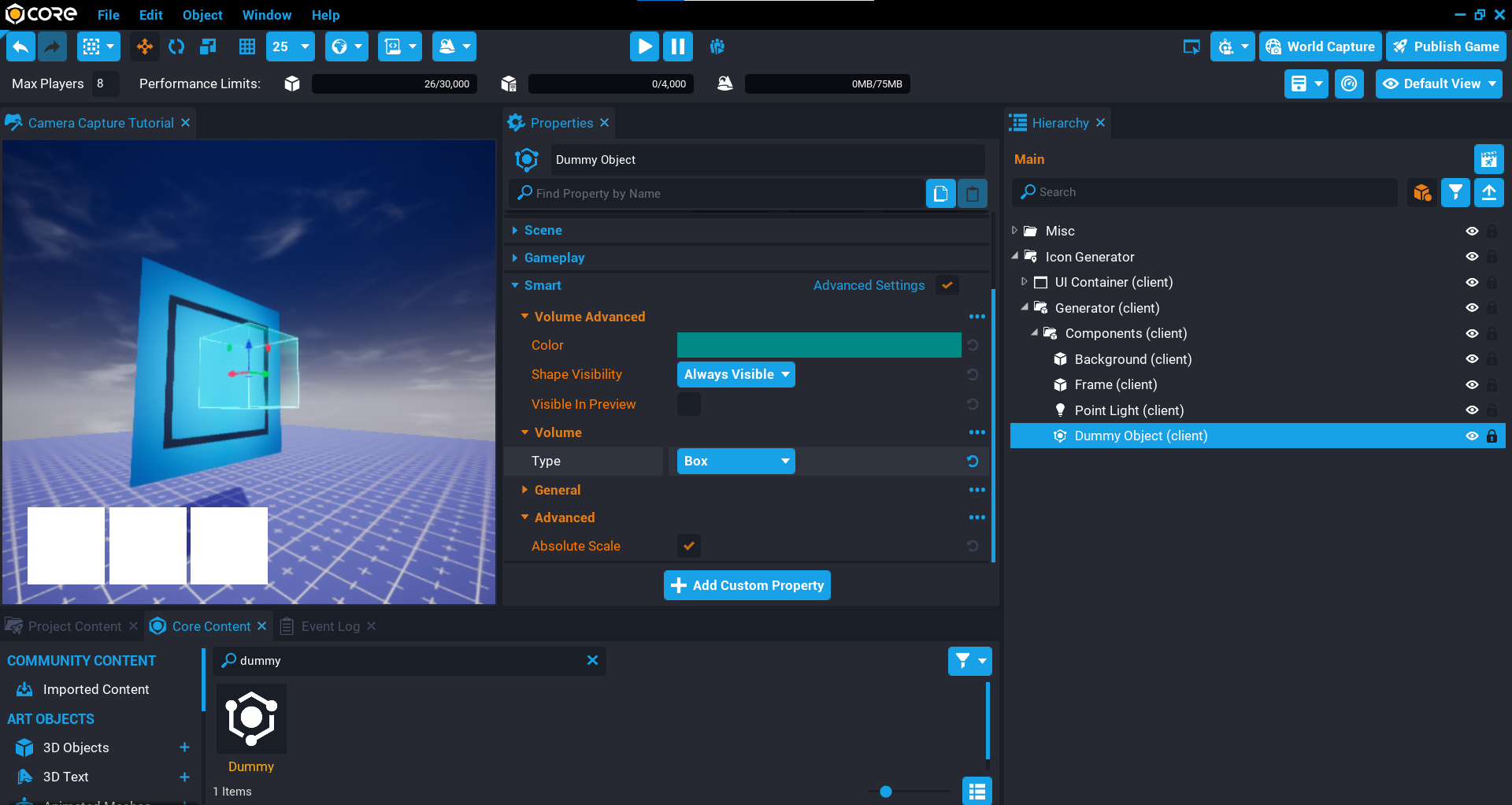 The camera will be responsible for taking the captures. 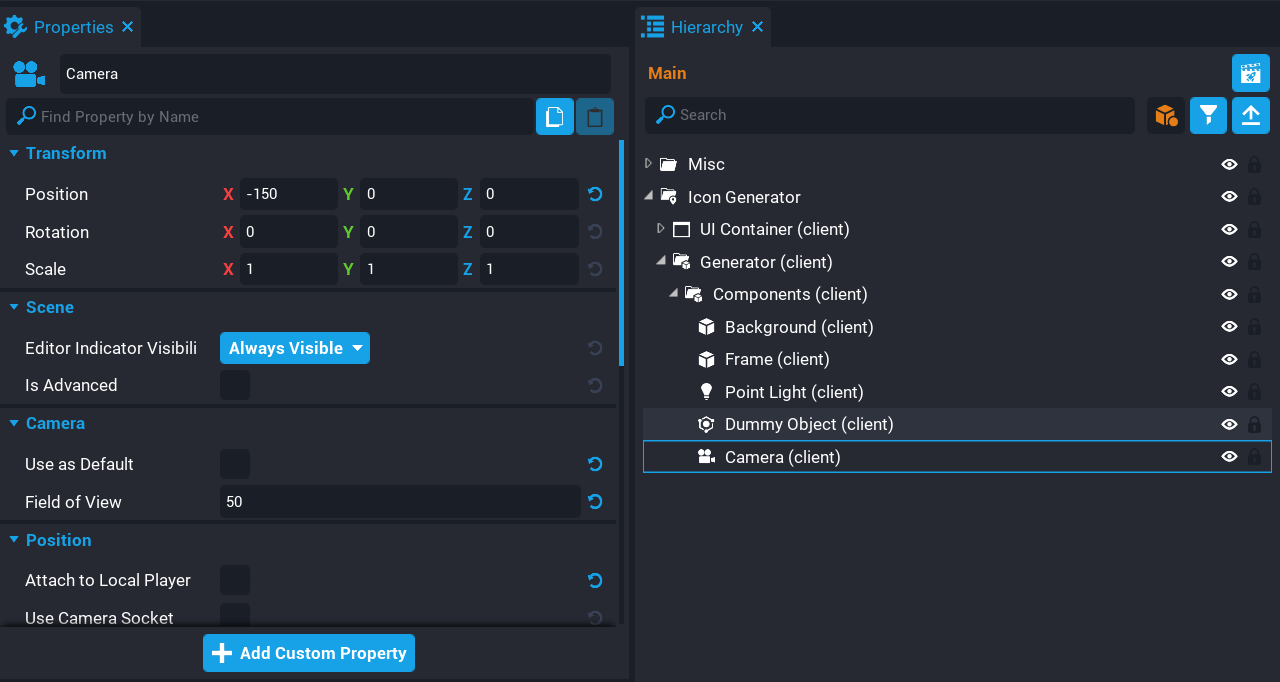 When you use a camera that will be used for camera capturing, certain properties need to be changed. Core will warn you in the Event Log about which properties should be changed when you try to create a capture.

Modify the following properties on the Camera you created. 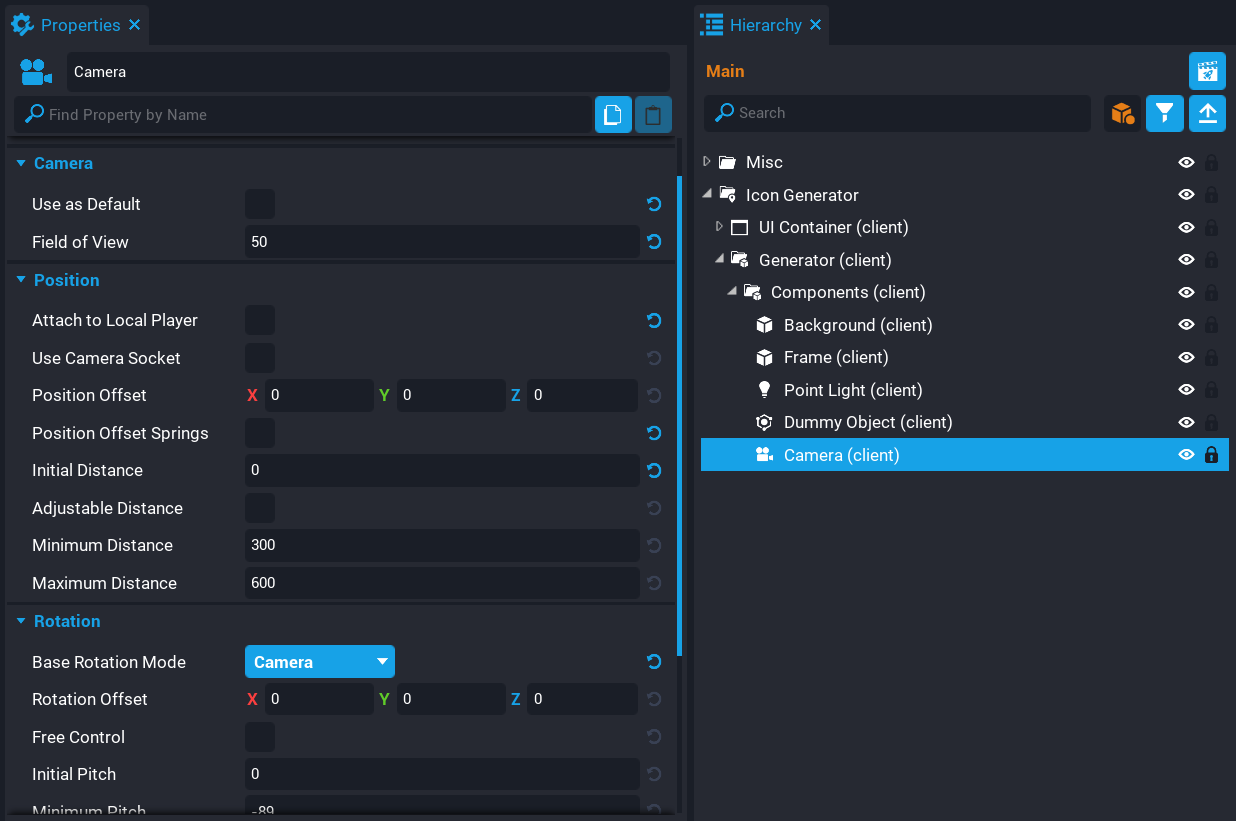 In the Hierarchy for the Light Blocker, click on the visibility icon

to make it easier to see the capture area. 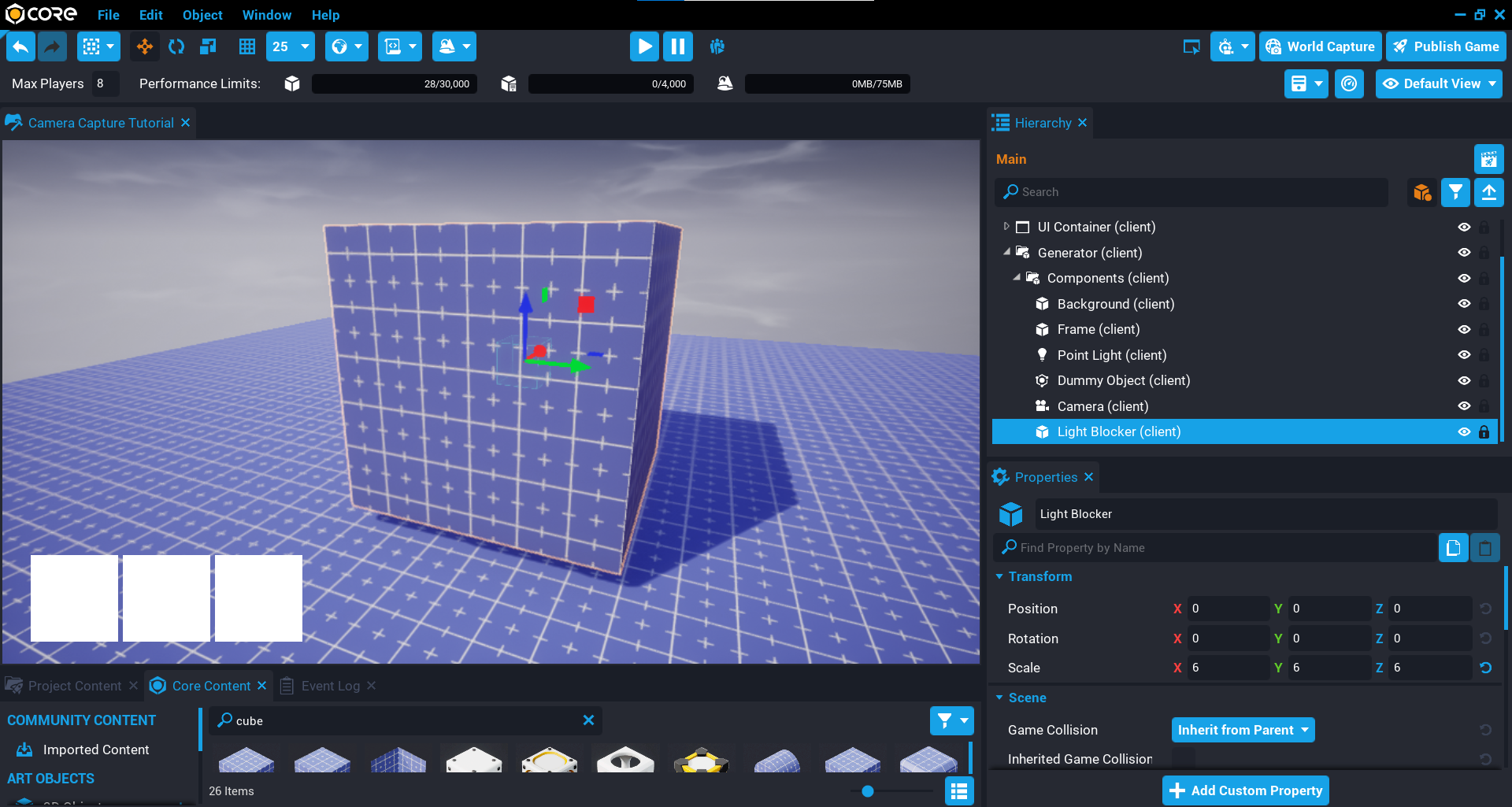 With all of the components created for the camera capture area, you will need a folder that will be used as the container for the objects that will get captured. This will be useful when you need to adjust the position of an object to be within the bounds.

In the Hierarchy, create a new folder called Icon Container inside the Generator folder. 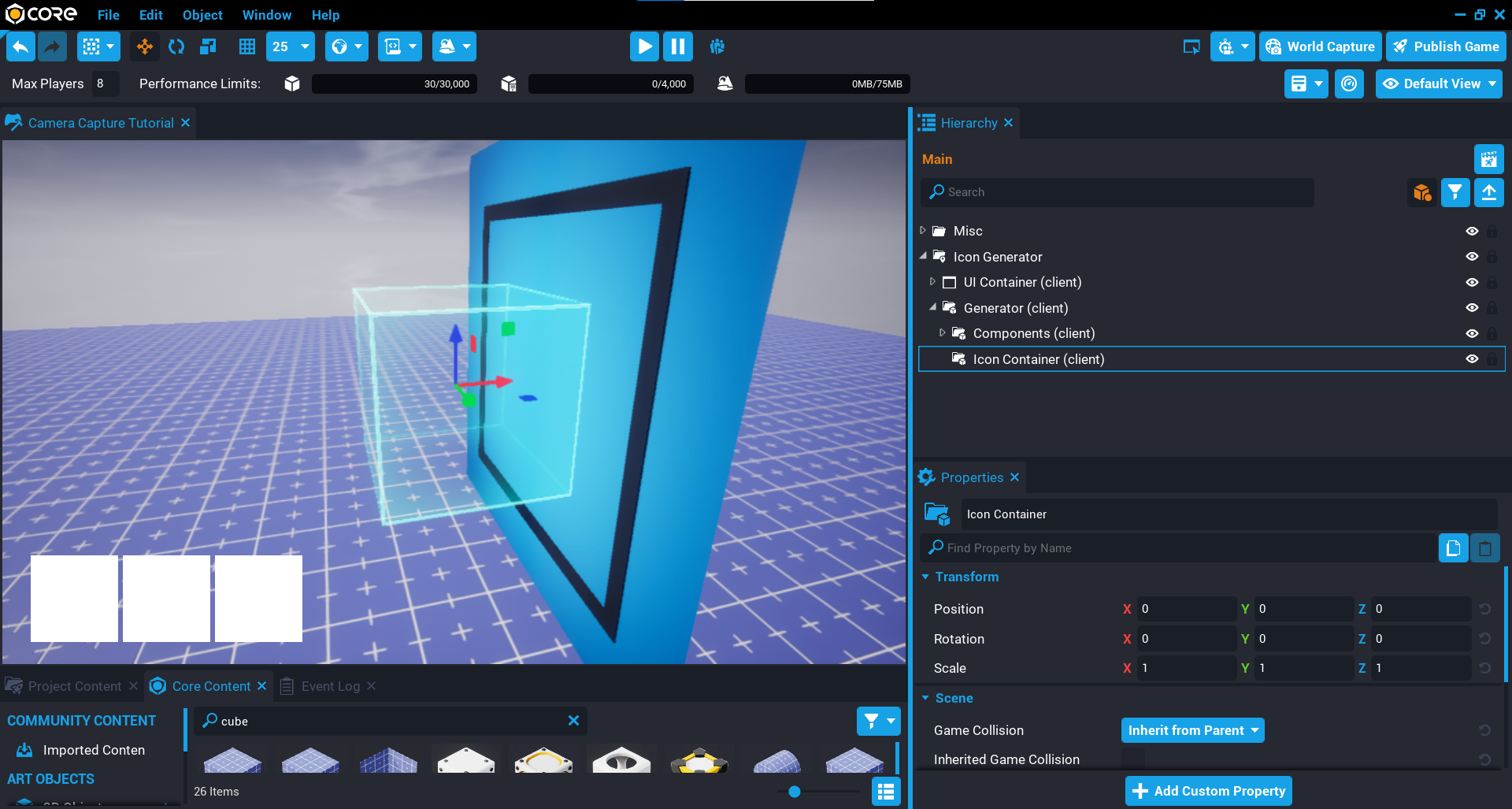 It is recommended to create a new group inside the Icon Container and place your 3D objects inside that group. This way you can position the children of that group correctly so that when the generator spawns the asset, it will be in the correct location as the children will be offset from the parent group.

For example, here is how Bottle 1 looks when done. Notice that the 3D object is a child of a group, and has been positioned and scaled to show within the bounds of the Dummy Object. Once you are happy with how it looks, create a new template. Repeat until you have 3 different templates. 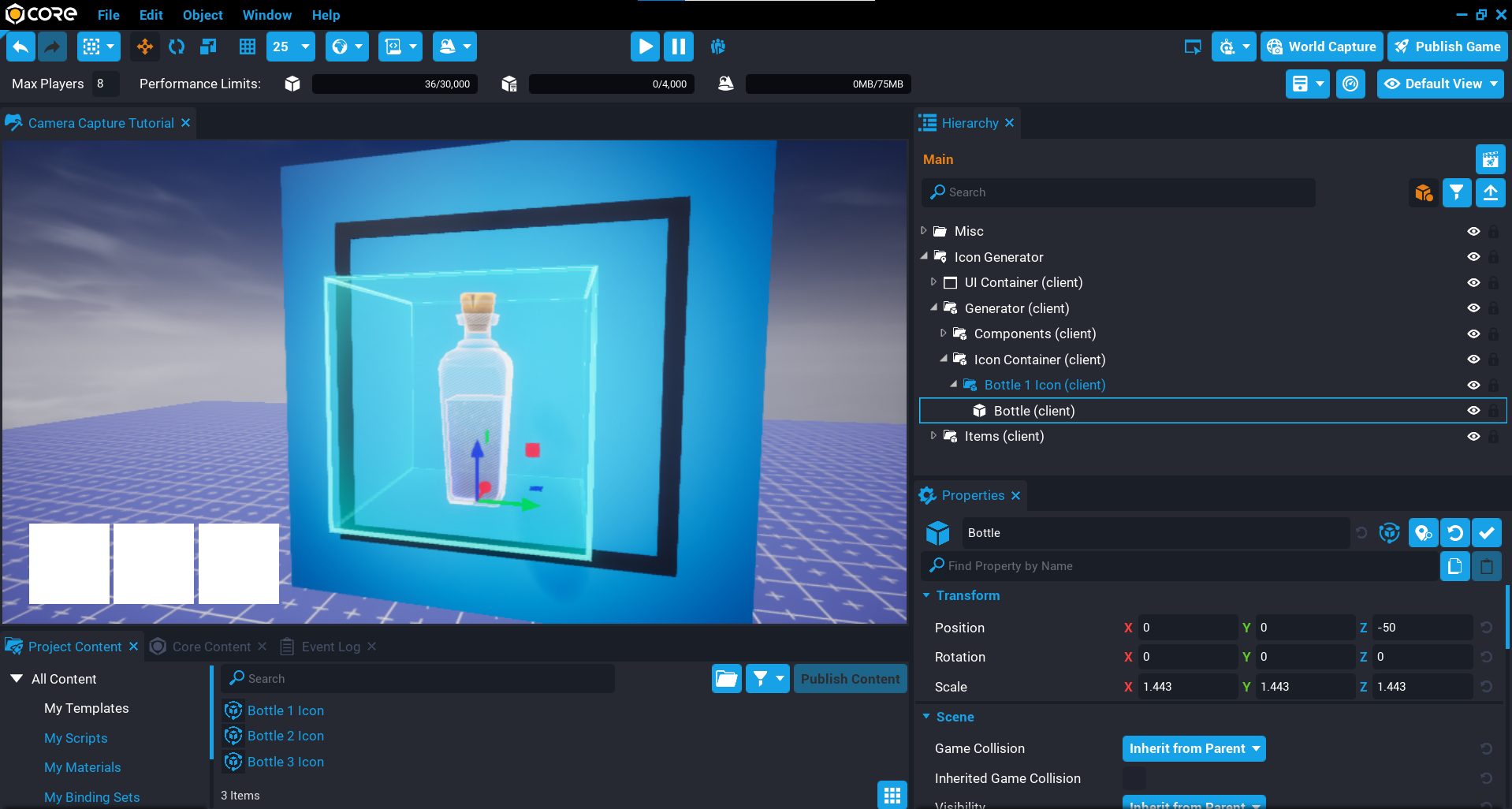 To create the icons for the UI, you will be creating a folder that will contain scripts that hold data. The data will be used later by a script that will spawn that asset, create the capture, and then assign it to the UI image.

You will need a folder that will hold all the data scripts so that a script can fetch all the items and process each icon.

In the Hierarchy create a new folder called Items inside the Icon Generator folder.

A data script doesn't usually contain any Lua code, it is simply a container that holds custom properties that can be fetched by a script. This is a good way to store data that a script needs to iterate through to process each item.

Because this script is going to be used multiple times in the Hierarchy, setting up default custom properties from the Project Content window makes sense so you don't have to keep creating the custom properties.

Repeat this for all your UI images. 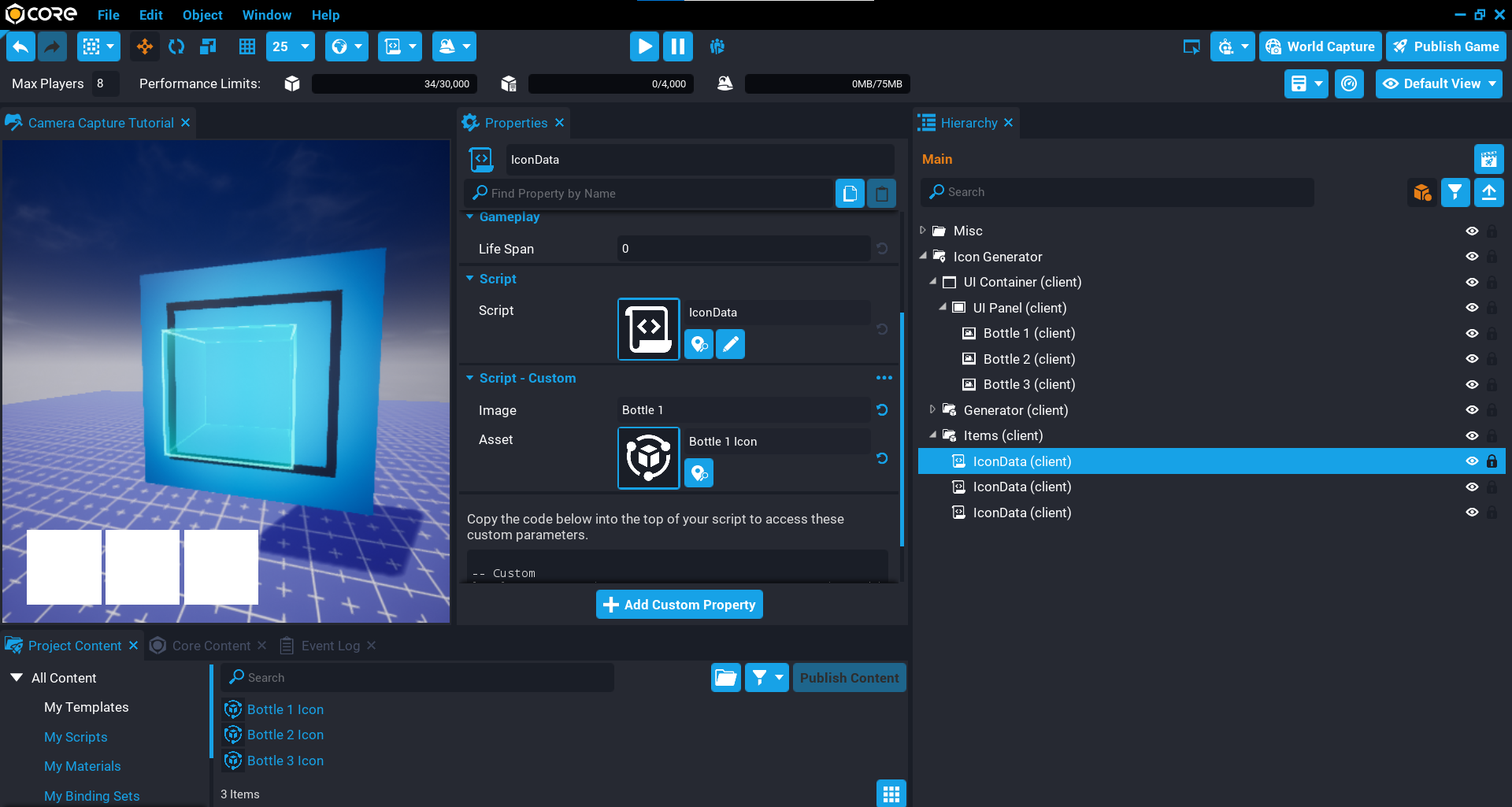 The final step is to create a script that will loop through the icon data in the Items folder and generate the icon for each one.

Create a new script called IconGeneratorClient and place it into the Components folder.

The IconGeneratorClient script will need references to the Items folder, Items Container folder, and Camera.

Open up the IconGeneratorClient script and add the property references.

To create the camera captures, you will need to loop over all the children in the ITEMS folder. Each child is an ItemData script that is holding data about which asset to spawn, and which UI image to use to display the captured image.

Each iteration of the loop will spawn the asset for the item, place it into the ICON_CONTAINER, and create a capture. Once the capture has been done, the asset is then destroy so the area is cleared for the next item to be captured.

When creating a capture using the Capture function, it will return a CameraCapture object that will be used in the UI. This can then be set for the image using SetCameraCapture.

Test the game and make sure the camera capture is working. If you followed along with the tutorial, then the 3 UI images will display a different capture.

Having an icon generator component can come in handy when you can't find a UI image that suits the object. Once the setup for the area is done, then it can be made into a template and reused in future projects.

There are more advanced features you could consider adding to the icon generator, such as automatically reusing or releasing existing captures, and even keeping track of how much memory budget has been used.