A huge benefit to Core is the vast amount of visual effects that are built-in and easily editable. You get to start with high quality effects that already exist, and truly make them your own.

Our team at Manticore has built a huge level map that you can explore at any time to see just some of the ways that all of our different visual effects (often shorted to VFX) could be used.

To get a tour of what is possible with visual effects in Core, run around this map and then come back to this tutorial to learn how to make a couple of the effects found on this map.

While the map explains many useful things about how to use all the visual effects, this page includes tutorials on how to make wicked cool VFX in Core using Lua.

Core comes with all sorts of visual effects built-in, all with different parameters for altering how they look and move.

To find all these visual effect objects, navigate to the Core Content tab and click on the "Effects" section.

This window can also be accessed via the dropdown menu "Window -> Core Content". 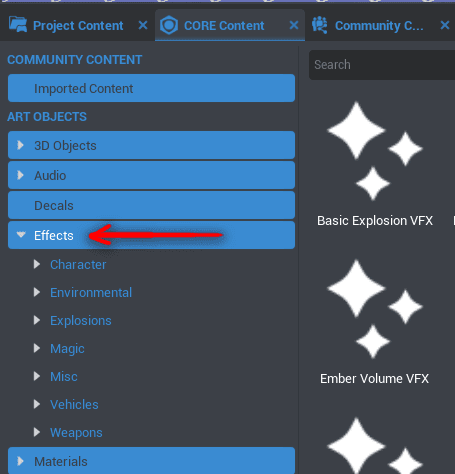 Currently, there are 7 different sections that contain effects you can use right away:

Don't be afraid to use any effect for any purpose--don't let categories restrict your creativity.

These larger categories can be found by clicking the little drop down arrow on the left side of the Effects button label. Each of these categories also have subcategories, that can be opened the same way: 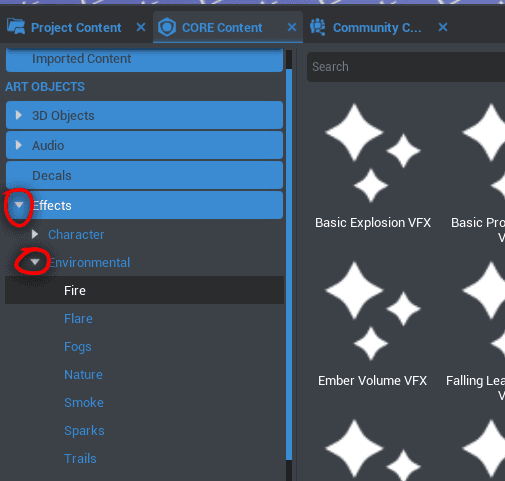 To check out what any of these VFX objects do, drag one into your viewport or Hierarchy. In most cases it will start playing immediately, but for one-off animations, you'll probably want to reactivate them multiple times to see what they do.

All VFX have a Play button at the top of their Properties window, so to check out what an explosion looks like, drag it into your scene and hit the Properties' Play button.

Besides all of the more literal visual effects that Core includes, there is also a category of Materials that lend themselves nicely to VFX, the SpecialEffects materials: 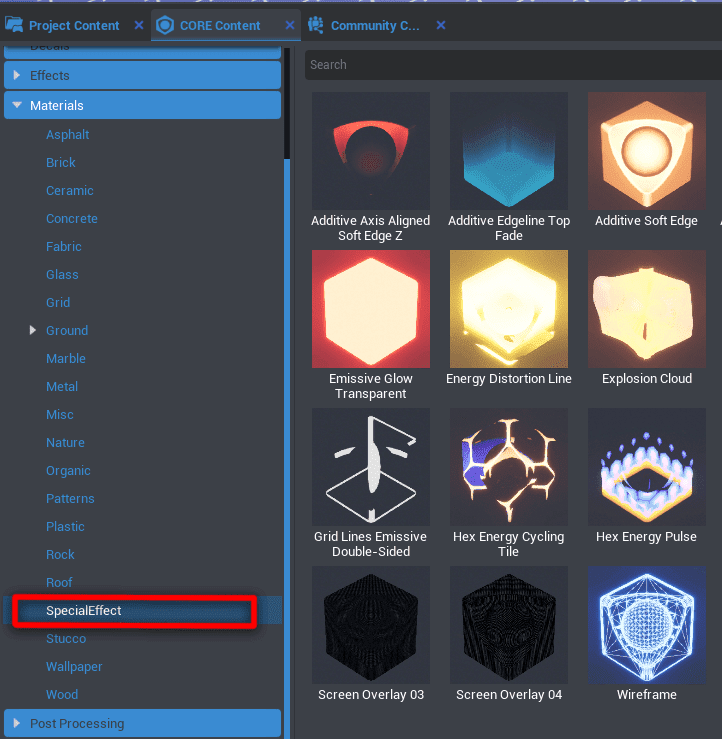 Use these in combination with the Effects objects to get even more variety out of what you can make.

Another category of effects that can make huge changes to your map are post process effects. As their name implies, these are applied on top of everything else in your game at the end, so they can be used to change everything visually about the game at once.

You'll probably want to always use some combination of these--the amount they can level-up a map visually is huge.

While you can use the video above if that is your preference, we'll next go over different effects in a written tutorial.

Just like in the video, let's start with the most dramatic and easy of the visual effects you can use in Core: Post Process Effects.

Post process effects can make very dramatic changes to a map with very little work. You can use as many of them as you want in combination, but this can eventually get tricky when you've got dozens. There are two main ways to use a post process effect: as an unbounded effect, or a bounded effect.

Several post processing effects have both a regular version and an advanced version. Use whichever suits your needs, but in this tutorial we'll go over the advanced versions of these effects.

Bloom is, basically, a glow effect. It gives everything that emits light in your scene a sort of magical halo, as though the atmosphere has thickened.

The best way to test post process effects is on an already decorated map with some variety in it. For this tutorial, I grabbed some templates from Community Content. Almost all (if not truly all) of these templates were made by students at Cogswell College during Global Game Jam 2020.

Ambient Occlusion (often abbreviated to AO) can be generally referred to as contact shadows. In the real world, when two objects are close together, less light is able to reach the cracks between them. So, to simulate this virtually, we use ambient occlusion.

Remove the previous post processing effect to go back to the first image.

Something particularly fun and weird you can do with the Ambient Occlusion we made is recolor it. This can create some really wacky effects, or in general set a specific color palette for a project.

These other two images below are a general explanation, and you don't need to do them for the tutorial. Knowing how to achieve these weird effects is good though.

Turning on the Use Two Colors option will give you a second color option, and using the Color Balance slider you can choose which color is more prominent in the scene. This gives you really strong control over the color palette, and lets you do particularly odd and unique things. Such as making weird radioactive shadows, if that's what makes you happy.

The other particularly interesting setting on the recolor post process is modifying Blend Weight. The lower this number is, the more intense this glow effect is. This could be used to showcase damage increasing on the player, or maybe a world on fire or whatever you can imagine.

In real life, a lens flare is a streak of light glare and sometimes a light shape floating in an image. This happens when light hits a camera lens and scatters around within all the parts that make up the lens. For some photographers, it can be annoying, but in general it is an unavoidable aspect of filming light.

In the virtual world, adding it in can make a scene feel more realistic and grand.

We'll start this section using two of the effects that we made earlier: the Advanced Bloom Post Process and the Ambient Occlusion Post Process both turned on.

Now you know how to control several different post process effects. Each one in Core Content has slightly different base settings and options, but now you have enough knowledge to understand how the others work too. Have fun experimenting.

The next section of this tutorial focuses exclusively on VFX. Just like the video above, we will be making an interactable treasure chest and using the Core built-in resource system.

Core includes the benefit of having an ever-expanding list of visual effect objects to work with, and thanks to the template system, we can combine these in even more unique ways to achieve whatever your vision may be.

We'll be making a treasure chest that requires an item to open.

Knowledge Level: No knowledge required, but this tutorial will use some simple Lua scripting. If you've never programmed before, you might want to check out the Lua tutorial first. 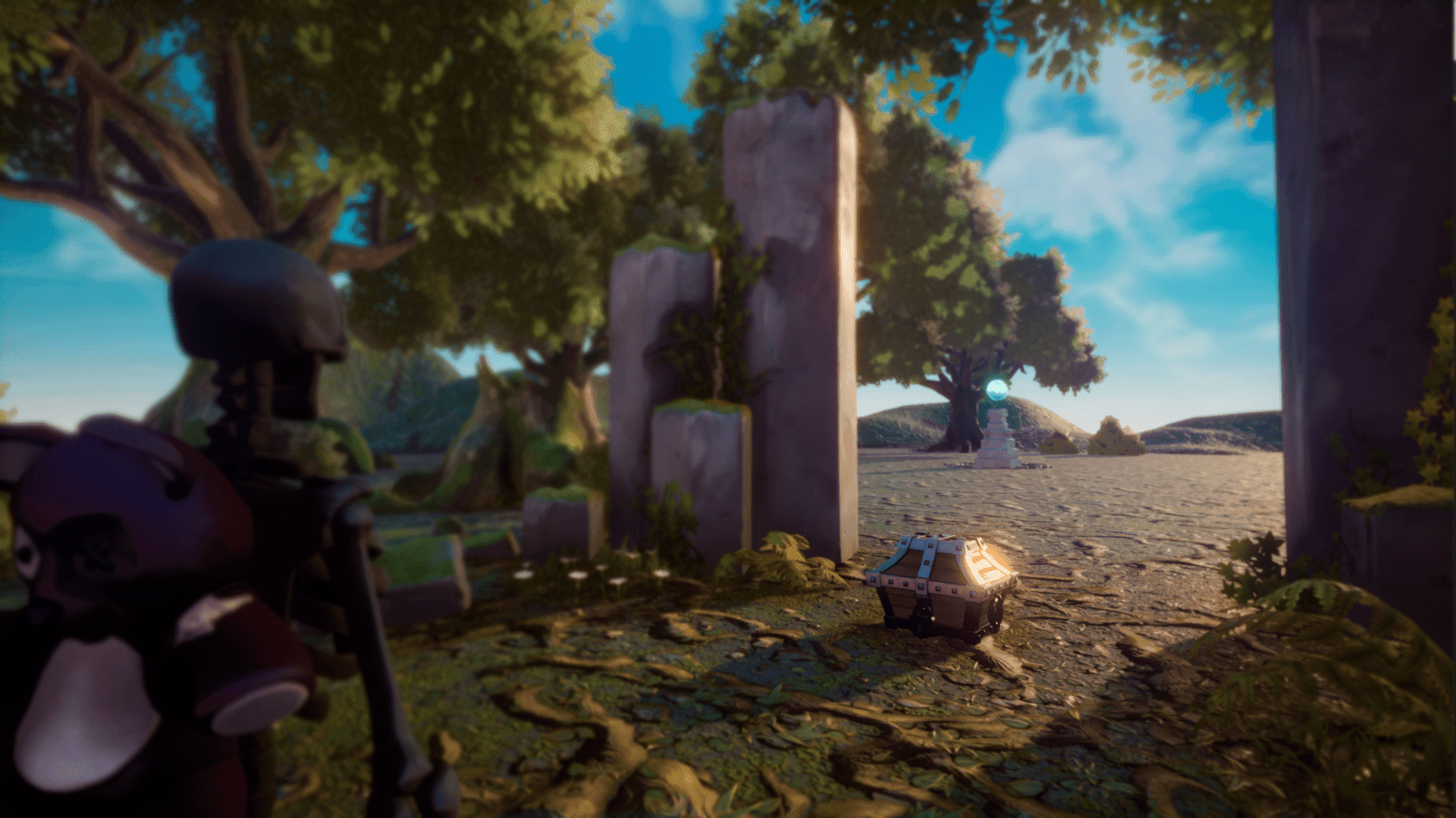 To start, open up a new project or whatever project you'd like to make this treasure chest in.

Setting up the Treasure Chest

Creating a Pickup to Unlock the Chest

Now when walking up the crowbar, the player will automatically pick it up. But, it still has the coin sound effect by default, and that feels pretty weird with this object. So, let's create a new effect to play.

Now if we test it, everything works correctly. But it sure looks plain and that feels bad. Let's add more effects to improve this.

Creating the Opening and Locked Effects

Now you've got some basic effects set up for your treasure chest. You have learned how to create effect templates by combining various visual effects with sound effects, and how to spawn them at specific times. Go forth, and make more awesome stuff.

In most cases you won't need to code to use the visual effects in Core. Often times templates will have a custom property for more effect templates, so you can make your own effects as templates and just drag and drop them into other content--just like the Fantasy Loot Bag we used.

There are so many ways that you can make effects unique. By combining several of them, changing their properties dramatically, and using them connected through code you can change the timing and positions of effects in whatever ways you can dream up.