In a lot of video games, the main character uses a weapon to make their way through the game world. "Weapon" can mean a gun, an axe, or even a magical tomato grenade.

Programming a weapon can be the most complicated part of making a game, but to make that easier, Core comes with a built-in weapon system. 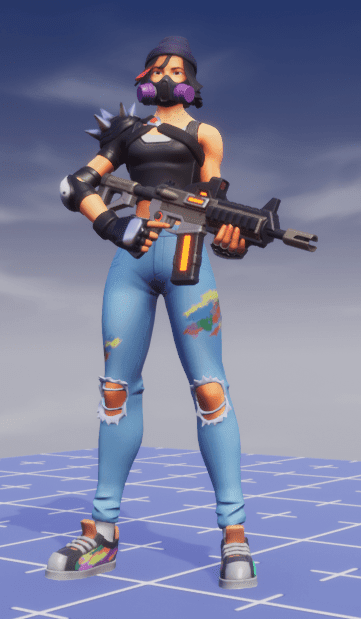 In Core, a weapon is an equipment type of object that can be created in any Core project.

There are a lot of differences between a piece of equipment and a weapon, but the main difference is that all weapons come with two built-in ability objects that handle the main use of the weapon.

An AttackAbility is bound to Left Click on the keyboard by default, and can be used for the traditional attack cycle of shoot-reload that you'd expect from guns--or for the cast-reel cycle you'd expect from a fishing pole.

A ReloadAbility is bound to "R" on the keyboard by default, and could be used for recharging and reloading of the weapon.

The Advanced Weapon & Abilities Tutorial will go over these concepts in more detail and are best read after going through this tutorial.

When a player picks up or equips a weapon object, the player is instantly able to use that weapon and all the abilities that it comes with. So to create a weapon like a rifle, all that needs to be done is to spawn a weapon, modify the settings for how far the weapon can shoot, and set up the AttackAbility to activate.

Thinking Outside the Box

Each step of creating a weapon allows for added creativity. While doing this tutorial you might come up with more ways to fancify your weapon. We will walk you through the entire process from an empty project, to using a gun of your own making.

This gun will be placed in the world and the player will need to pick it up to use it.

Setting Up the Weapon 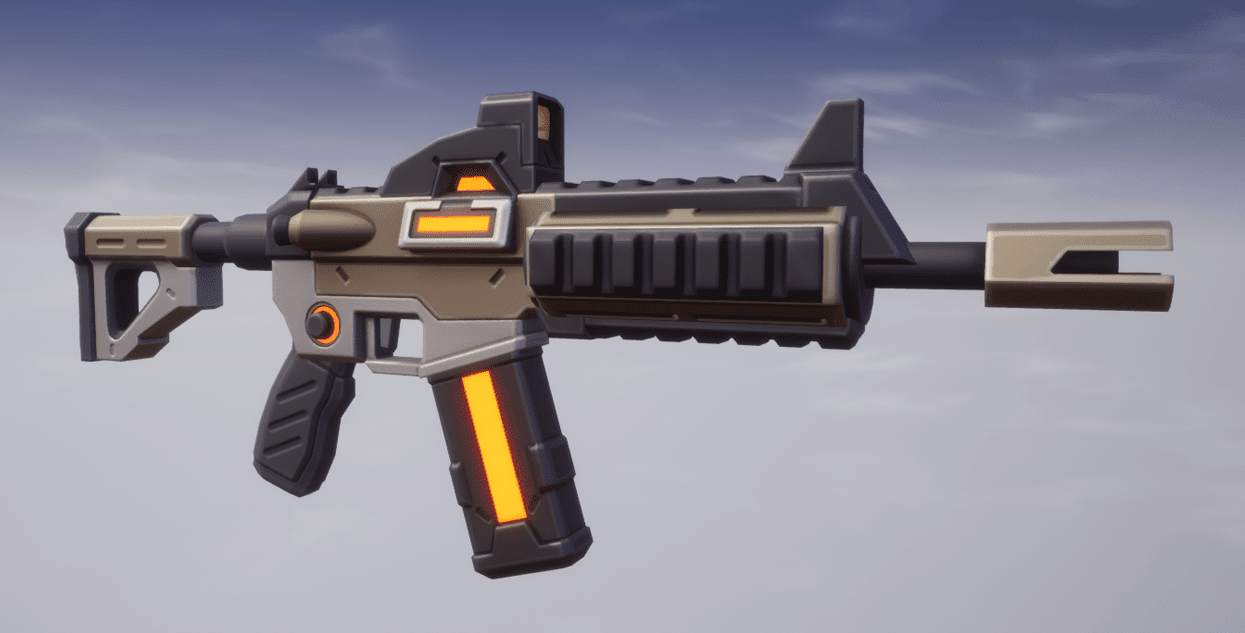 You could use the Modern Weapon - Auto Rifle 01 (Prop) in Core Content as a weapon model or make your own by combining different props in Core.

This folder of Core Content contains various pre-built weapons, as well as the parts that the weapons were made from. You can make all sorts of crazy things with this; from more weapons to space stations to anything you can imagine. 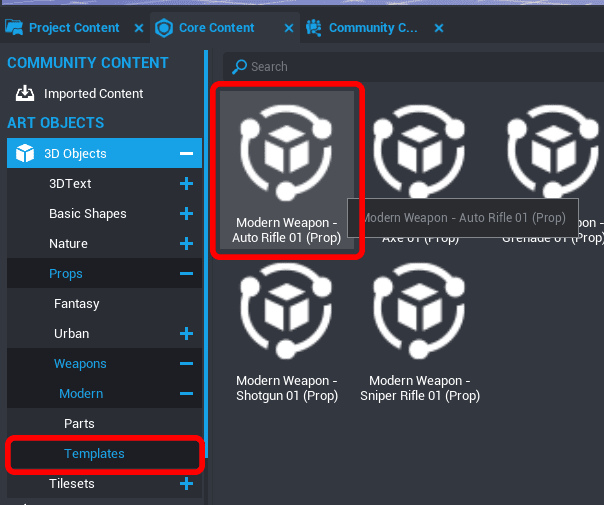 The first thing to do is to navigate over to Core Content, and scroll down to the GAME OBJECTS section. Within Gameplay Objects, drag a Weapon into your project Hierarchy window.

A weapon in the Hierarchy includes two Ability Objects and a PickupTrigger beneath it--these objects are "children" of the "parent" weapon object. 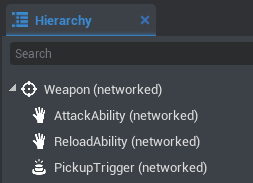 The in-editor window scene weapon will be completely "empty" having almost no visible parts at first--only the gizmos for the weapon and the trigger.

This takes some wiggling--do what looks best to you.

Currently, the weapon can't shoot anything. For a bullet to fire out of the gun when using Left Click to fire, a bullet template needs to be dragged into the weapon.

Click on the weapon in the Hierarchy window. In the Properties window, scroll down to the Weapon section. Make sure that Is Hitscan Weapon is checked off.

To Hitscan or not to Hitscan 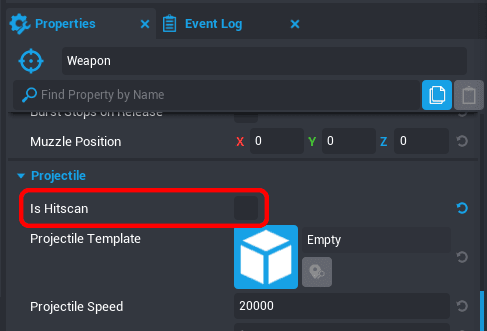 "Hitscan" means that the weapon would immediately have an impact on whatever it is shooting at, meaning the bullet wouldn't need to travel through the air. It also means that there isn't a visible bullet. In this tutorial, we're going to build a projectile bullet.

Having a projectile also means that you can change how fast it travels through the air, along with other settings in the Weapon section.

Look right beneath Is Hitscan. There is a property called "Projectile Template". Here is where we would drag a template for the bullet. 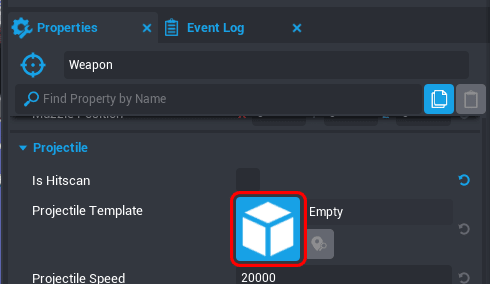 To do this, let's add a Cone - Bullet object to our project Hierarchy. This can be found in Core Content, within the Basic Shapes section. Drag one into the viewport, and change the scale to shrink the size until you are satisfied with the bullet shape.

Once it is a template, delete it from the project Hierarchy. We now can drag that bullet template from our Project Content tab into the Projectile Template property of the weapon. 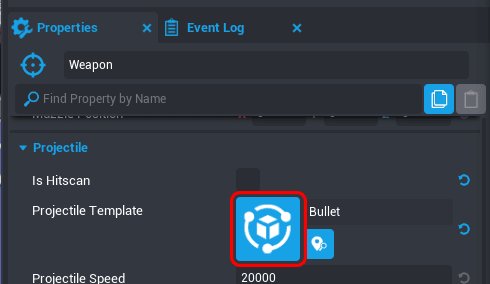 Weapons come with a property for Damage--setting this determines how much getting shot by this gun will hurt other players.

Not All Weapons Need to Shoot

The weapon system can be used for things that aren't weapons. If you were making a bubble blower, or a fishing pole, perhaps you would set the damage to 0 and use different visual effects. The key is that this is what actually happens when the player uses the weapon.

If you've set up everything correctly along with this tutorial, the player bot should die after 4 shots.

Now all the basics are hooked up. The gun should be able to shoot and kill other players--if not, try going back through the steps above to see where something might be missing. Typos are a common human error, check those and don't worry about having missed it the first time. Even the very best will miss things like that.

Right now, it's not super satisfying to shoot the gun--it's impossible to tell if you've made contact when shooting another player. We expect some sort of splatter to happen.

Core has tons of visual effects and sound effects (often abbreviated to vfx and sfx) built-in that we can drag and drop onto the weapon.

Let's start adding in some cool effects--starting with the moment of impact. 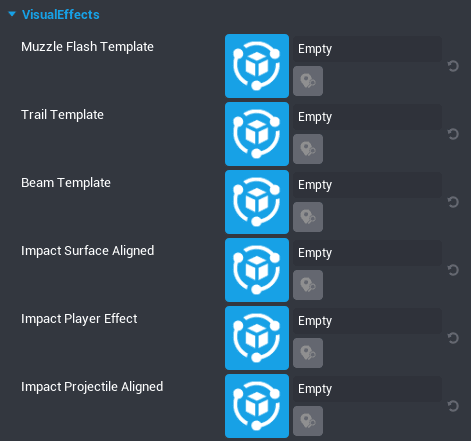 You might notice if you try dragging an effect from Core Content into the weapon object's properties, it doesn't work. This is because the weapon properties only accept a template type of object. So, we need to make one.

We'll start with a visual effect. In the Core Content tab, search for "generic player" and look for the object called "Generic Player Impact VFX". Drag this object into your project Hierarchy.

This visual effect is a little poof of smoke that happens briefly when played.

Next, let's grab an audio object to make sounds when a player is shot.

Now that you've made one effect, try making other types of effect templates for the other sections of the weapon's effects. A good one to add is the Impact Surface Aligned effect--this happens when the player shoots something that isn't a player, like a wall or the floor.

Check it out in multiplayer preview mode to see how it feels.

This is a really simple version of a gun. Each part could be done a different way or made more complicated for whatever your imagination can dream up. You could go back into what we have created to add more effects or change the way it works.

What we've done here is the simple setup. Using this method you can make any sort of basic weapon you can dream up just by changing different properties of a weapon and its abilities.

If you want to try you hand at some coding to really add complexity to your weapon, and give it even more abilities, check out our Advanced Weapons & Abilities Tutorial to feel for what can be done.